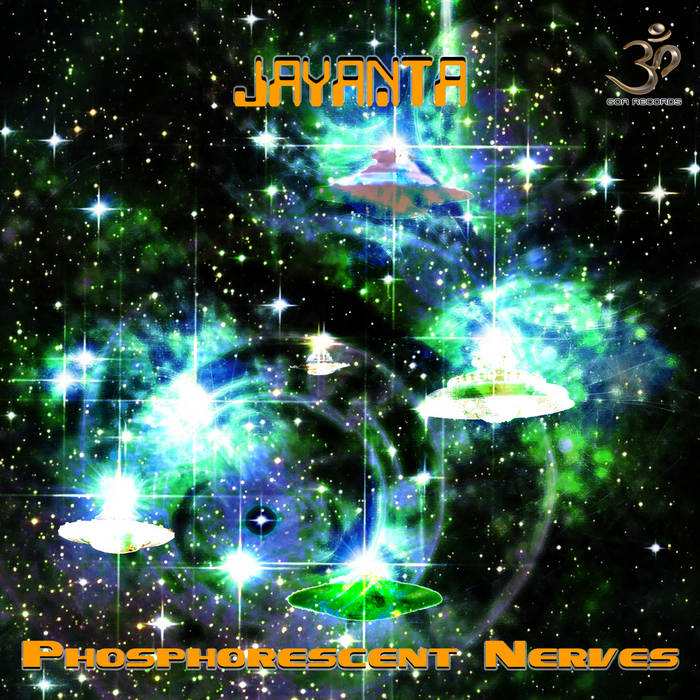 Goa Records presents the full length Lp Phosphorescent Nerves by Jayanta with nine exclusive psychedelic trips which will hypnotize minds and lift bodies on lightship voyages to the Pleiades and to other dimensions only returning after frequency boosting you to more powerful states of being. The l.p. is related to the 2016 winter solstice specifically and the 3 super moons leading to it ending with a rare lunar eclipse on the solstice itself, the power of the event is manifested through the heavy bass chugging, mental pulsating, psychic-ly moody alien intelligence transmitted night psytrance experiments by Jayanta. Jay Emanuelson began djing in Feb 1995 and bought his first GOA trance record Etnica - Fractal Gates, in New Haven CT. He played his first headline gig Sept 1995 spinning hard Techno & House at Hartford CT, Civic Center. By 1997, after meeting the influential Goa Dj K.J. in Boston, Jay was encouraged to completely cross over to dj GOA. By 1998 Jay would frequently guest dj at the famous Tsunami parties but soon by 2000 changed his art focus to tattooing. 2006 discovered the group Naked Tourist, Parvati Records and the sounds of that era's dark psytrance, which for him changed everything. Leading Jay to focus his djing on the twilight psyde of trance from 2006-2009 when he had the pleasure to dj with Mubali who taught him about synth Oscillation (that changed my life, thanks Greg). From 2010 - 2015 Jay focused on family while developing sounds and producing until now in 2017, after much patience Jayanta has emerged. Manifesting new psytrance realities out of the sounds he developed over 6 years brought forth these new songs, with the help, guidance and inspiration of his wife Christine aka 3pink3lotus3 and their son and daughter, also Kri Samadhi and DJ Psyclone, who picked Jayanta as a new label dj for Ananda Tribe Records. Jayanta has released two ep’s on Digital Drugs Coalition and continues his endless creative output with Goa Records and soon with releases on his new label and more.