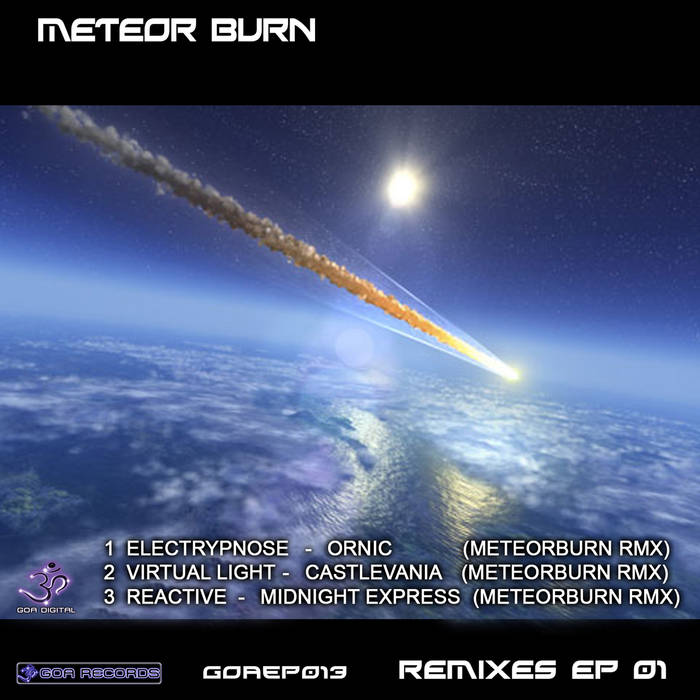 Meteorburn, Portuguese duo, Sérgio aka Meteor & Xano aka Burn who are burning a hole in the dance floor with their non stop mega masher bass lines and full throttle mentalities coming deep from psy-space with a mission to deliver the hardest rocking chunky space debris right to your brain. Meteorburn is just what you need to keep your local scene up to date on the latest psyentific discoveries. Stratosphere is the long awaited and highly anticipated debut full length SUPER BLASTER from the dynamic duo of Hard Night Time Psytrance. Industrial, Gothic, Full Power, Twisted, Spaced Out and Totally Mental are just some of the words that come to mind with the first listen to an incredible new stage in the evolution of the genre. After releasing a successful compilation a year before this and a solid score (20) of hit singles on the leading hard psy labels and a slew of EPs and Remixes these ten special tracks emerge to truly start the story off. Meteor Burn also happens to be massively talented Mastering engineers who made many versions and tested them everywhere till the formula was just right (wait… lets refine it some more Xano…). Now is the time for the atmospheric explosion to occur and you will feel the blast across the planet as the shock wave leaves a lasting impression and forever changes the topology of this planet. Get your limited edition copies of this fine tuned and fully polished gem of intergalactic meteorite ore… still steaming hot from its burning detonation deep in the impact crater! Digital Drugs proudly presents this crown achievement in their ever expanding coalition of psychedelic trance artists from around the globe who believe that digital art + music are the purest form of getting high. Expect unique, fresh + truly out of this world productions from this hot posse !!

Artist Profile:
Meteorburn is a 2 member project, Sérgio aka Meteor & Xano aka Burn. In the year 2000 they went to a lot parties and they won a lot of contacts, which who taken a union of creativity to launch the project Meteorburn,so they started to make dark style in influences of : Ocelot, Electrypnose, Kasakta, Digital Talk, Irgum Burum, Parasense, Psychotic Micro, Ram , highko and others. Together they show to you a live set with many strong atmospheres, giving in that way a beautiful travel, with a sound really original. In Studio they have a Sony Vaio, an Asus, an Interface audio Terratec Phase 26, RME Multiface II, M-audio oxygen 8 and CME UF midi keyboard, Samson Resolv 80a and Alesis One Mk2 Active Monitors, TC PowerCore FireWire, Virus PowerCore, Clavia Nord Lead Rack 2x and Steinberg Cubase 5.

Label Profile:
Digital Drugs Coalition is a union of psychedelic trance artists from around the globe who believe that digital art + music are the purest form of getting high. Expect unique, fresh + truly out of this world productions from this hot posse!!
Darkstar is the sub-label of Geomagnetic that focuses on Dark, Night time music, with hard and experimental styles.
Geomagnetic.tv was established in the summer of 2001 by Dr. Spook one of the founders of the prominent San Francisco 3D FX and Multimedia boutique known as Minds Eye Media (est.1995). www.mindseyemedia.com